March has been a slow blogging month. Sorry if you’ve been waiting patiently for a new post! I think I can look back on it in terms of content, if not quantity. I finally got around to writing a feature that is about something I am passionate about – children’s reading, and then wrote a very personal but heartfelt message to Beatrice. This post is probably going to be the last one of the month, so it makes me proud that the content for this one is just as important to me as the other two!

If I’m honest, this month has also been a blur of amazing awesomeness and it’s been hard keeping up with all of Bea’s new skills – this has definitely been one of my favourite months of being a parent yet. More on that in the future…

Mother’s Day (from a Father’s point of view)

Unbeknown to Lucy, I’ve been thinking about this since Christmas. Granted, the elements of the plan didn’t come to fruition until this week, which is far more like the me Lucy is more familiar with. I knew we were a few years away from the whole ‘bring mummy breakfast in bed’ thing (a staple part of mother’s days past), but desperately wanted to mark the occasion of Lucy’s first Mother’s Day!

Mum, I already apologise in advance that this post isn’t about how amazing, caring and fantastic you are. I will always continue to tell you this whenever I get the chance, but it’s definitely strange how your priorities change a little as you embark on your own family adventures!

To be honest, there isn’t a great deal that I could’ve done that would’ve shown my gratitude to Lucy for everything that she has done in the last 17 months (no, you haven’t missed 9 months of Bea’s life already…but yes, things do seem to be moving that quickly!).

So, I did what any Dad would do in this situation – I turned to Google. I am fully aware that this is the least imaginative thing and likely to provide the least unique results (which, as it turns out, was apparently the case looking at our friends’ Facebook feeds – I’ve put this down to the Dad hive mind of geniusness rather than us having no imagination). I’d also picked up a few gifts in the sales that I knew Lucy would really like (if anyone from Orla Kiely is reading this, we will happily review things…ahem), so I was on the road to being prepared.

Of course, Bea contributed with suggestions like “Dadadadadad,baababaaa,” which proved unfruitful on Google. Might have to hold fire on birthday gift ideas from her for the time being…

I knew I wanted to keep up this year’s tradition of handmade cards. I’ll do another blog post on these as I’m quite proud of them so far! It’s an excuse to do something a bit creative and experiment with white paint pens, which I started using over the Christmas holidays to do some random sketches (predictably of Star Wars stuff). I had one masterplan for Lucy’s Mother’s Day card. It would feature a handprint in between the two ‘M’s, making an excellent, personal representation of the word ‘Mum’. I couldn’t do ‘Mother, I didn’t have a big enough card! There were two factors here that I didn’t really consider with this grand plan:

The card you see in the title image is card number 6. You will also have noted that it looks rather like a foot, not a hand. You  would be right. You would also be forgiven for thinking that Beatrice either has one massive big toe and three others, or possibly six. She has a regulation set of 5 little piggies. This however, is the best print of anything I managed in the 5 minutes I spent before Bea was fed up of my ‘experiments’.

Something else to factor in at this point is the way that Beatrice tends to like chewing on things (like, say, her fingers) at this time of the day. So, with her trying to crawl, and me being hyper-sensitive about the thought of her eating paint, it was a bit of an ordeal to apply and remove all of the paint each time!

After 5 failed hand efforts (all of which Lucy has now seen), I decided to take advantage of the fact that Bea is trying to crawl everywhere and whilst distracted, painted her foot, applied the card as quickly as I could and then had a wipe at the ready to avoid her stomping paint all over the bathroom floor. Thankfully, we got something I could use and the rest of the card was completed with a bit of help from the internet for designs. A suitable note, handwritten by an alarmingly gifted 8-month-old, was written and crisis averted.

The final part of the plan was to get something personal. I’ve become a fan of notonthehighstreet.com in recent months, and so decided to rummage through their ‘1st Mother’s Day’ items. After seeing a few items, one from ‘Little Baby Boutique‘ looked great. An idea that really appealed was the thought of bringing Beatrice in as the present, wearing a special babygro to mark the occasion. With a few words and clicks later, I received a lovely, personalised vest and then today’s plan could be put into place.

With the pretence of ‘No, no, you stay in bed, I’ll get her ready’ I snuck off to get the presents from their secret hiding places and got Beatrice into her new vest. Honestly, if I could have planned the look she gave Lucy when she saw her this morning, I’d have set up my own business marketing it on the very site I mentioned previously. Lucy was met with a massive, beaming smile and giggle, and then received her presents and card. It was better than I thought it would be. 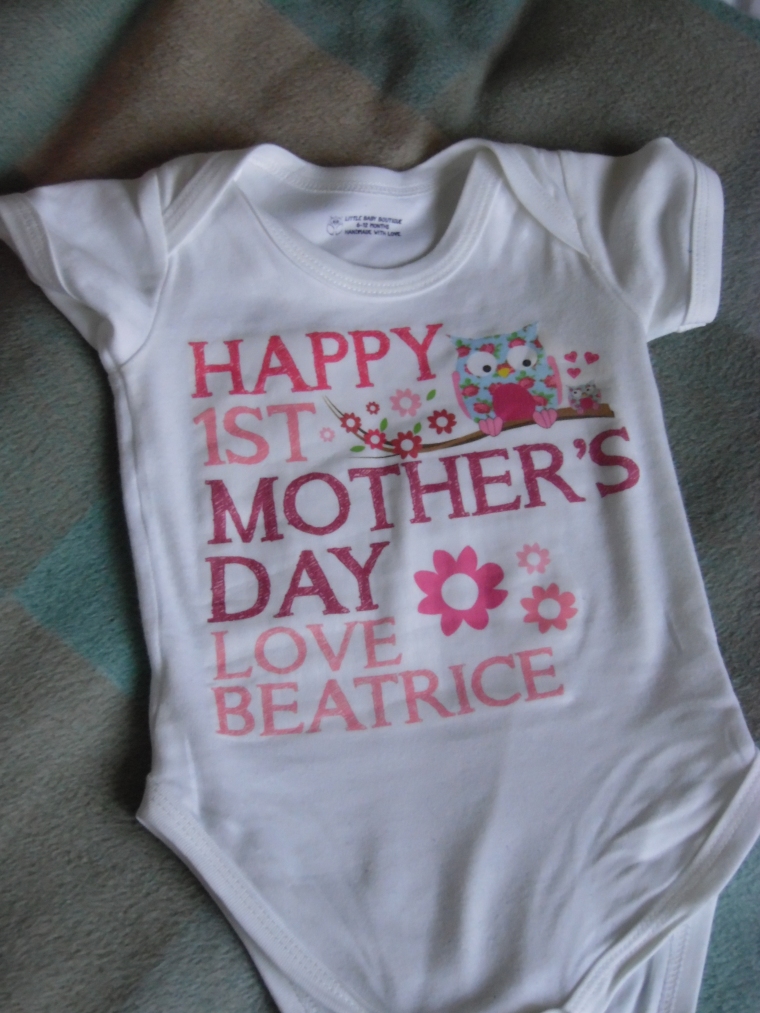 It also transpired that a fellow Dad, who I met at ante-natal classes, had also turned to the bespoke gift site and ordered a matching vest. Thankfully, any awkwardness was avoided as he used his child’s name and not Beatrice’s. Great minds, my friend, great minds.

The rest of our day was spent with relatives near the coast, and some really fun time on the swings -Bea is definitely a real daredevil baby (I tried finding ‘daredevil baby’ clothes, but I don’t think Lucy would’ve appreciated the reference to the Marvel character as that was all I could find!). Room for improvement for next year? Probably. Hopefully Beatrice (or Google) has a few more tricks up her (or its) sleeve by then!

Massive shout out to my two favourite mums on Mother’s Day!

Felt good to be blogging again too! Feel free to come over to my Facebook page as well – think that’s most of social media covered now…

One thought on “Happy Mother’s Day!”