Three weeks back at work now, and just about getting the hang of the work-life balance. I absolutely love my evening routine of get home earlier than I used to, spend as much time as possible with Beatrice, bath time and a final cuddle to send her off to sleep.Ok, so the later night work patterns aren’t so great, but it totally balances out. Oh, and how people coped without lunchtime photo updates is also beyond me. Hearing how well-behaved and brilliant she’s been puts that little extra spring in my step at work!

Weekends are even better, and I get the chance to see how she’s starting to interact with things, chat away and grin repeatedly! It’s also an opportunity to take stock of the week with Lucy and spend some time as a trio.

This post however, is not about Beatrice, it is about our pet rabbit, Leo. I’m just wondering if this is a common occurence amongst new parents and pets. We’ve had Leo since last September, and he was originally a house bunny. He had free reign of downstairs, and loved every second. We moved him into a hutch in Spring, initially to make room for Beatrice. He does love it outside, so this was a win-win. Then Beatrice arrived, and obviously he played second fiddle. And then it was almost like a jealous older sibling had arrived.

The first sign was when he kicked her cocoon thing off the sofa (she wasn’t in it!). He was just jumping past it and then all of a sudden it was on the floor! 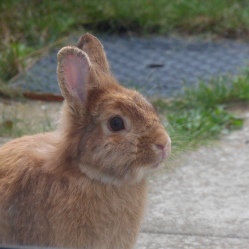 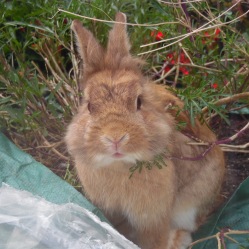 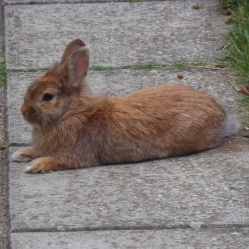 Since then, he’s left a dirty protest on one of her playmats (thank god for machine-washable things!), and has been returned to us by the neighbours on either side. Cue lots of panicked ‘thank yous’ and rudimentary DIY solutions to keep him in check. The first was a simple gap in the fence, the second however was more of a Houdini/Great Escape effort. We have a garden ladder with pots and things on which he has found he can climb. We got back one day to find he had not only climbed to the top shelf, but then proceeded to jump over the fence and plummet to the other side unharmed! Lucy and I had no idea how he’d even got out of his run until breakfast a day or two after he’d been ‘grounded’.

We discovered the truth whilst looking at him out of the window. He is capable of jumping on top of his hutch from the floor, so is practically unstoppable! I’m convinced he is suffering from ‘Attention-Seeking-Pet-Syndrome’ with Beatrice’s arrival. He’s certainly trying his hardest, but as if we could ignore him! He’s so fluffy! I think he might have to come back inside for the winter months…